In early 2005, the Academy of Arts (Akademie der Künste or AdK) unveiled its brand-new building on Pariser Platz directly adjacent to the Brandenburg Gate. Designed by the architects at Behnisch & Partner, this prominent AdK location is home to art presentations, documentary exhibitions and temporary installations. It also hosts AdK discussion roundtables, concerts, readings, films and theatre and dance performances. Among the new building's main features are the refurbished skylight rooms that date back to 1906 and in which Max Liebermann once exhibited his works. The ground floor is open to the public and features a passageway, bistro and bookshop.
Founded in 1696, the Academy of Arts in Berlin is among the oldest cultural institutions in Europe. It was the progenitor of Berlin's art and music schools while also organizing the first public art exhibitions and helping to lay the ground for Berlin's rich museum landscape.
The Academy currently has six sections: art, architecture, music, literature, performing arts, film and media art. Of its roughly 400 members, more than one third live outside of Germany. With the estates of more than 1,000 artists, the AdK also has one of the most important interdisciplinary archives in Germany as well as an outstanding art collection.
The Academy is a meeting place for artists and a site of public debates focusing on art and cultural policy. Its large archives also make it an internationally prominent location for scientific research.
The Academy of Arts has a second location on Hanseatenweg in the Berlin district of Tiergarten. 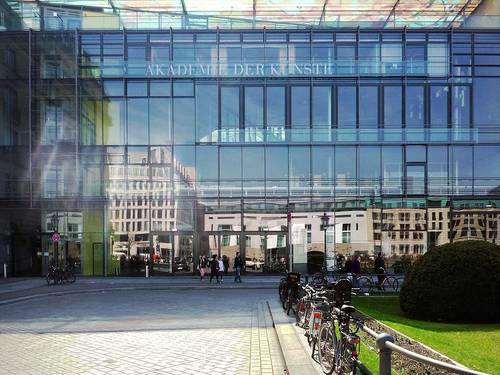 events at this place